Thank you! The registration application has been sent successfully!
The request was not sent! Please complete all required fields and check the validity of the e-mail address! (*)

Ask us a question 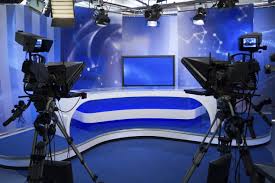 Ability to edit on both linear and non-linear production systems in multiple formats such as Beta SP, Beta SX, SVHS, MPEG, etc.

Reads television-programming log to ascertain program to be recorded or program to be aired on RCTV closed circuit television.  Ensures all graphics reflect the current marketing strategy and Gold Anchor Standards.

Observes quality control monitor to verify that station is on-air.  Monitors television system to ensure all channels are operating appropriately within specifications and correct programming is being televised.

Maintains equipment and ensures proper function.  Cleans videotape path to remove contaminants that would affect quality of recording or playback of videotaping equipment.

Observes scales in video and color monitors and operates controls to adjust video and color levels.  Assures video and audio levels are within appropriate range as to not cause distortion over television system.

Maintains inventory and maintenance of all video equipment in the Cruise Director Division, including broadcast room, theatre, cinema and conference room.

Contract for an indefinite period. Employment contracts are between 6 and 8 months and vacation length is 8 weeks. .There are two types of contracts for staff with fixed salary and personal with income from tips. The company offers a guaranteed minimum wage for staff working in tips system, but the monthly income varies depending on the workstation size, itinerary, performance.
NO. Fleet vessels are active 365 days / year, except during maintenance and repair periods in which crew members on board vessels are active.
The current Royal Caribbean cruise program offers visiting of more than 280 different destinations around the world. Their list (besides all the “famous-popular” port destinations) features Alaska, Canada New England, Europe (UK, Mediterranean, Baltic, Iceland), Asia, Australia New Zealand, Caribbean (also Bahamas and Bermuda), Hawaii, Mexico Riviera, South America. On relocation, Royal Caribbean ships also offer Transatlantic cruises and Panama Canal transits.
Fleet vessels are equipped with the latest navigation technology, with maximum operating safety.

A job on a luxury cruise ship offers many opportunities, and the advantages are considerable:

Applicants must meet the following characteristics:

What are the steps to obtain a job on a cruise ship:

Pre-selection with the Agency:

Final interview with the Employer

What documents are required for register an application?

Creating a professional Curriculum Vitae is an essential element in the application process. For some candidates, it is a simple piece of paper, but for others, this piece of paper is the most effective tool to promote personal skills that can make a difference. Curriculum Vitae written in a professional form instantly attract the attention of Recruiter. In an open competition with other candidates, sometimes for a small number of jobs, this document may just tip the scales in your favor. The choice of form and content of this document is entirely yours. Our recommendation is to keep in mind that an attractive CV should contain accurate, clear, detailed and complete information .

It’s the main criterion for recruitment, a fluent communication is a guarantee of proper understanding and interpretation of job tasks, internal regulations and express your questions, it also helps the crew to rapidly adapt onboard.

The company strives to hire couples on the same ship, but cannot guarantee boarding on the same day for both partners. Company personnel needs prevail. Only candidates who can prove whether they are married, whether they live at the same address are accepted. Registration and couple IDs are available only on board when both partners have embarked, however it is very important to mention this aspect since the first discussion you have with our Recruiter.

During the interview, applicants are required to declare:

Normally, you will be working with at least 3 breaks on schedule.

Time is very carefully monitored aboard a cruise ship, by means of electronic timekeeping. You can perform additional work only at the express request of the management, in this case the overtime period will be offset by equivalent free time or paid overtime .

Aboard a cruise ship, there are various ways of recreation and facilities offered for free to the crew members :  the crew bar, recreation areas, internet café, library, gym, pool  (on some ships).

For some staff members (officers , senior management positions and staff members), there may be extra privileges (access to certain passengers areas ) between certain hours.

There may be days off depending on rotation, even 24 hours, but they remain at the discretion of management team, NOT guaranteed by the contract. Normally, a day off aboard a ship typical equates to a free port day, but there are still a few hours of work.

Disembarkation tickets are covered by employer at the end of each successfully ended contract for all crew/staff members, no matter position/department they belong to.

Embarkation costs may vary, depending on the job or the port of embarkation.

Job Cruise does NOT ask for any tax or fee for its mediation services. Recruitment services, interviewing and assistance in embarkation process are FREE of charge.

Not always. In the boarding process, the representatives of JOB CRUISE offers detailed

information about access to transportation, accommodation location, people and contacts.

Subscribe to our newsletter to be informed of all JOB opportunities!